This is Punk-8. A cyberpunk inspired Action RPG made for the Fantasy Console Game Jam.

Punk-8 is an action RPG based game, where you are being chased. In each section of room, street or office you have 60 seconds to fight off the locals, loot the room and get to the next one. If you don't, you get caught and loose.

The game only uses the Arrow and Z and X keys. The controls for what they do are on the screen.

There are three characters which are chosen by you at the beginning, these have the following types; Gunslinger, Tekhead and Pyskik. Gunslinger are good with projectile weapons, Tekheads are good with energy based weapons and hacking. Psikiks are good with psi attacks they also have a mean punch too.

Weapons and grenades are found by looting rooms, but you can only carry two weapons at a time per character.  If a character dies, then he is dead, you have to move on without them.

Sadly, I didn't have enough time to finish the game. These are the features, I wanted to add in.

1. Grenade support, with different types. Explosives, Energy and Psi. Grenades were universal and depending on the class that threw them would determine the type of attack.

2. Hacking. The Tekhead, would hack the room and enemies, causing batteries to explode, or hidden turrets to fire. Sadly, this is not in so the LINQ based weapons are marked as projectile ones.

3. Psi close attacks, are projectile. I didn't have the time to put the animations in.

4. No background art for inside the buildings. It also rains indoors too.

6. If I had enough tokens, an opening animation explaining the story.

Anyway, I hope you enjoy the game as much as I enjoyed making it! 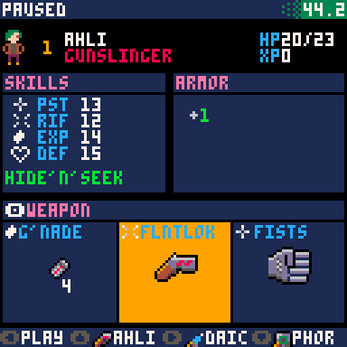